Maintain a reliable web presence for an important tool in transition. 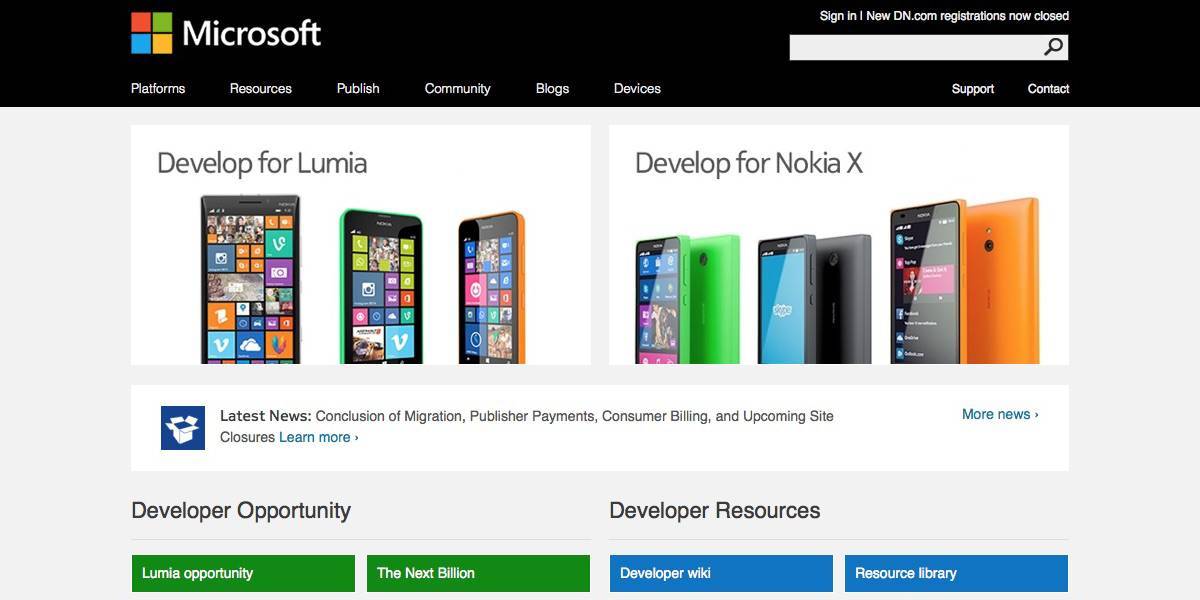 Microsoft became the new owner of Nokia's developer portal. We had built the initial site and continued on as a support and maintenance provider.

The marketing and developer support teams at Microsoft were our primary contacts. They needed a tool that continued to stay out of the way.

Microsoft acquired the mobile device division of Nokia. The developer portal came along and needed just as much reliable support as ever.

We built the site to be portable and maintainable. Thanks to the architecture choices we made, the site easily adapted to the needs of its new owner.

In 2014 we built a new developer platform for Nokia's mobile devices division. The developer.nokia.com site served tens of thousands of app developers worldwide. We went from concept to launch in a few short months. When Microsoft acquired the device division of Nokia, they also acquired our developer platform. We remained on as the development and support lead as the site transitioned to new owners with a new audience. More than ever, our work needed to stay out of the way, be reliable, and be bulletproof.

Any enterprise organization establishes and maintains strict security standards for the many web properties they maintain. The developer portal for Nokia devices, acquired by Microsoft was no different. Sensitive developer profile information was routed through this site and needed to be secured. Fortunately, with Nokia we had advised a system architecture that would rely on a pass-through approach to sensitive personal developer information. There was an SSO system in place and in use that continued to house developer information. The developer portal that we maintained would be aware only of developer user names during the login process. Everything else was a pass-through. This architecture choice made the transition to Microsoft very easy as it greatly reduced the security headaches.

A website can and should be portable. If you need to pick it up and move it somewhere else, why shouldn't you be able to?

The developer portal for Nokia mobile devices ran on a simple LAMP stack CMS: ExpressionEngine. It was fronted by Akamai and served from Microsoft Azure. We were proactive in moving the site to the Azure cloud, knowing that the site would very likely become a Microsoft property and that transition would be very easy. It was.

One of the great advantages of a major website running on such a simple LAMP stack platform is adaptability. Not only is the system easily adapted and modified, but it's easy to find developers who understand it and can modify it.

The team is one of the most important factors in Web Reliability. Choosing technology that makes choosing the team easier has a far-reaching positive effect.